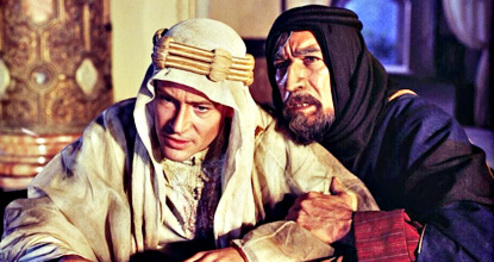 One of the screen's grandest epics, this monumental story recounts the true life experiences of T.E. Lawrence, better known to the world as Lawrence of Arabia. A young, idealistic British officer in WWI, Lawrence (Peter O'Toole) is assigned to the camp of Prince Feisal (Alec Guinness), an Arab tribal chieftain and leader in a revolt against the Turks. In a series of brilliant tactical maneuvers, Lawrence leads fifty of Feisal's men in a tortured three week crossing of the Nefud Desert to attack the strategic Turkish held port of Aqaba. And following his successful raids against Turkish troops and trains, Lawrence’s triumphant leadership and unyielding courage gain him nearly god-like status among his Arab brothers.

With Oscar® winning cinematography, magnificent locations, Maurice Jarre’s famed score and a screenplay based on Lawrence’s own writings, David Lean’s Lawrence of Arabia is a masterpiece. Over the years the film was heavily cut, but in 1988 a reconstruction of the film was undertaken. David Lean and original editor Anne V. Coates then worked on the film to create Lean’s Director’s Cut. It is this version that has now been lovingly digitally restored by Sony Pictures Entertainment, ensuring that the film will be seen as it was meant to be, for the first time since its initial release. The film will also be screened in its original roadshow format, with an overture, intermission, entr’acte and exit music.